Choose the correct answer in question 1 – 3: 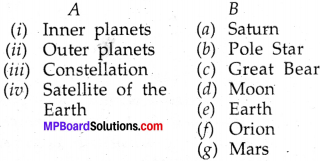 Question 9.
What is a constellation? Name any two constellations.
Answer:
Constellation is a group of stars that appears to form some recognizable shape. For example, Ursa Major and Orion.

Question 10.
Draw sketches to show the relative positions of prominent stars in:
(a) Ursa Major, (b) Orion 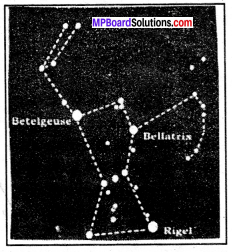 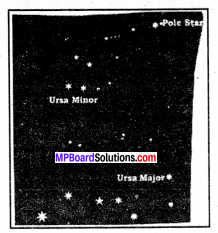 Question 11.
Name two objects other than planets which are members of the solar system.
Answer:
Asteroids and Comets.

Question 12.
Explain how you can locate the Pole Star with the help of Ursa Major?
Answer:
Pole Star can be located with the help of the two stars at the end- of Ursa Major. Imagine a straight line passing through these stars as shown in Fig 17.3. Extend this imaginary line towards the north direction. (About five times the distance between the two stars). This line will lead to a star which is not too bright. This is the Pole Star. Observe the pole star for some time. Note that it does not move at’ all as other stars drift from east to west. 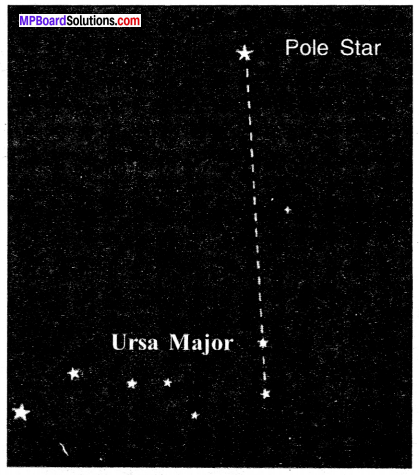 Question 13.
Do all the stars in the sky move? Explain.
Answer:
No, stars actually do not move but they only appear to move from east to west, as the earth from where we see them, rotates from west to east. However pole star, which is situated in the direction of the earth’s axis. It does not appear to move.

Thus, 1331 Earths can be accommodated within the Jupiter.

Question 16.
Boojho made the following sketch (Fig. 17.4) of the solar system. Is the sketch connect? If not, correct it. 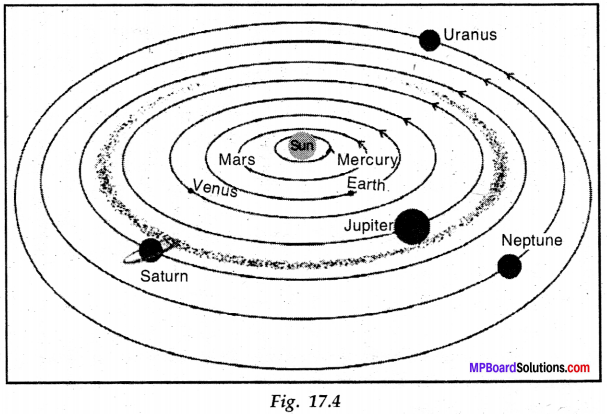 Answer:
This sketch is not correct. The correct sketch of solar system is given is Fig. 17.5. 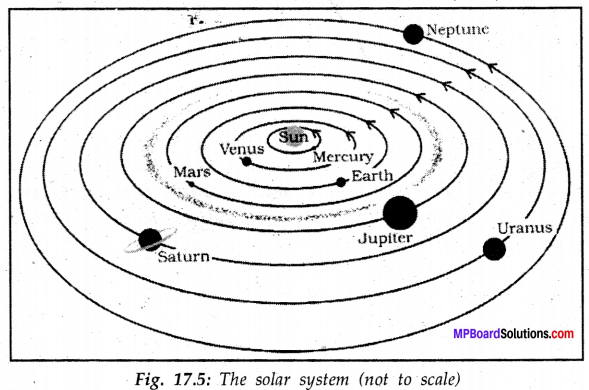 Question 1.
The North-South line at your place.
Let us learn to draw the north-south line with the help of the shadow of a stick. Fix a straight stick vertically in the ground where the Sun can be seen for most of the day. Call the foot of the stick as point O. Sometime in the morning, mark the tip of the shadow of the stick. Say this point is A. With OA as radius draw a circle on the ground. Wait till the shadow becomes shorter and then starts increasing in size. When the shadow again touches the circle, mark it as point B. Draw the bisector of the angle AOB. This is your North-South line. To decide which side
of this line shows North, use a magnetic compass. 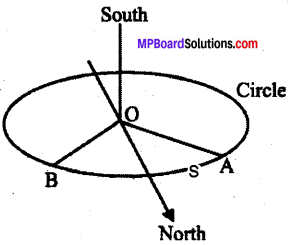 Question 2.
If possible, visit a planetarium. There are planetariums in many cities. In a planetarium you can see the motion of the stars, constellations and planets on a large dome.
Answer:
Do yourself.

Question 3
On a moonless night observe the sky for a few hours. Look out for a meteor, which appears as a streak of light. September-November is a good time for observing meteors.
Answer:
Do yourself.

Question 4
Learn to identify the planets visible to the naked eye and some prominent constellations such as Great Bear (Saptarishi) and Orion. Also try to locate the Pole Star and the star Sirius.
Answer:
Do yourself.

Question 5.
Position of the rising Sun – Uttarayan and Dakshinayan :
This activity may last for several weeks. Choose a place from where eastern horizon is clearly visible. Choose also a marker, such as a tree or an electric pole, to mark the position of the rising Sun. It will be sufficient if you take the observation once every week. On any day, note down the direction of the rising Sun. Repeat this observation every week. What do you find? You would have noted that the point of sunrise changes continuously. From summer solstice (around 21 June), the point of sunrise gradually shifts towards the south. The Sun is then said to be in dakshinayan (moving south). It keeps doing so till winter solstice (around 22 December). Thereafter, the point of sunrise changes direction and starts moving towards north. The Sun is now said to be in uttarayan the equinoxes (around 21 March and 23 September) the Sun rises in the east. On all other days, it rises either north of east or south of east. So, the direction of the rising Sun is not a good guide to determine directions. The Pole Star, which defines North,‘is a much better indicator of directions.
Answer:
Do yourself.

Question 6.
Form a group of students. Prepare a model of the solar system showing the planets, and their relative sizes. For this take a large chart paper. Make spheres representing different planets according to their relative size (Use Table 17.1). Y6u may use newspaper, clay or plasticine to make spheres. You can cover these spheres with paper of different colours. Exhibit your models in the class.

Question 7.
Try to make a scale model of the solar system showing distances of the planets from the Sun (Use Table 17.1). Did you face any difficulty? Explain it.
Answer:
Do yourself.

Question 8.
Solve the following riddle and try to make similar riddles yourself.
My first is in VAN but not in PAN
My second is in EARTH and also in HEAVEN
My third is’ in ONE and not in TWO
My fourth is in BUN and also in FUN
My last is in STAR but not in RADAR
I am a planet that moves round the Sun.
Answer:
It is the planet venus.

Question 1.
What is Universe?
Answer:
Universe is the space surrounding the earth. It contains all the heavenly objects like stars, comets, planets, asteroids, etc.

Question 3.
What are comets?
Answer:
Heavenly bodies, composed of dust and gas, revolving around the sun with long bright tail are called comets. Their period of revolution around the sun is very large. They are particularly seen, after the pretty number of years.

Question 8.
Give three reasons why life cannot survive on Venus.
Answer:
All the above conditions are present on the earth. Hence, life is possible there.

Question 9.
Expand the term INSAT. What three things are expected from INSAT?
Answer:
The term INSAT stands for Indian National Satellite. This satellite series expected to carry out three tasks. These tasks are: