Question 2.
Agriculture has developed the most in the area of:
(a) Sahara desert
(b) Nile Valley
(c) Central Africa
(d) S. Africa
Answer:
(b) Nile Valley

Question 4.
To which areas do the Bushman, Tureg and Pygmy tribe belong?
Answer:

Question 1.
Describe the areas of cultivation of the major crops of Africa.
Answer:
In Africa only 10% of the soil is suitable for agriculture. The major crops grown in Africa are:
1. Wheat and Barley:
Mainly cultivated in Egypt Algeria and Morocco.

2. Maize:
It is cultivated mainly in Belgium, Congo, Angola, Kenya and Morocco.

3. Cotton:
Five per cent of cotton in the world is produced by Africa. Egypt is the largest producer of cotton in Africa Kenya, Uganda and Nigeria are the other major cotton producer countries.

4. Groundnuts:
Africa produces 22% of the groundnuts in the world. Major producing countries are Niger, Sudan and Nigeria

5. Coco:
World’s total 50% of the coco is produced in Ghana, Nigeria and Uganda.

6. Rice:
Major producers of rice are Malagasy, Senegal and Nigeria

7. Cloves:
Zanzibar and Pemba islands produce 90% of cloves in the world.

Question 2.
Describe the industrial development of Africa.
Answer:
Africa is mostly covered by plateaus and deep forests due to which the means of transport is not well developed. It is the main cause which has hampered the industrial progress. The important agriculture-based industries are wine, sugar, cotton clothes, cigarettes and extractions of olive oil, etc.

The leather and woolen industries have also progressed due to cattle and sheep rearing. The large industries have flourished in mostly South Africa and Egypt where iron and steel, cement, garments and utensils are manufactured. Pretoria, Johanseburg, Durban, Cairo, Alexandria are the main centers of industries.

Question 3.
Write about the mineral resources of Africa.
Answer:
Africa is very rich in several valuable minerals. It is the leading diamond producer 50% of the diamonds in the world is mined here. Major producers are Zaire, Botswana and South Africa. Africa produces more than 50% of the gold in the world.

Major producing countries are South Africa, Central African Republic, Southern Rhodesia and Ghana. Copper is produced in Congo, Zambia and South Africa. Manganese is found in Ghana and South Africa. Iron is found in Morocco, Algeria and Tunisia Apart from these minerals, several other minerals like uranium, tin, lead, chromium etc. are also found in Africa.

Map work:
Make the following in the map of Africa. 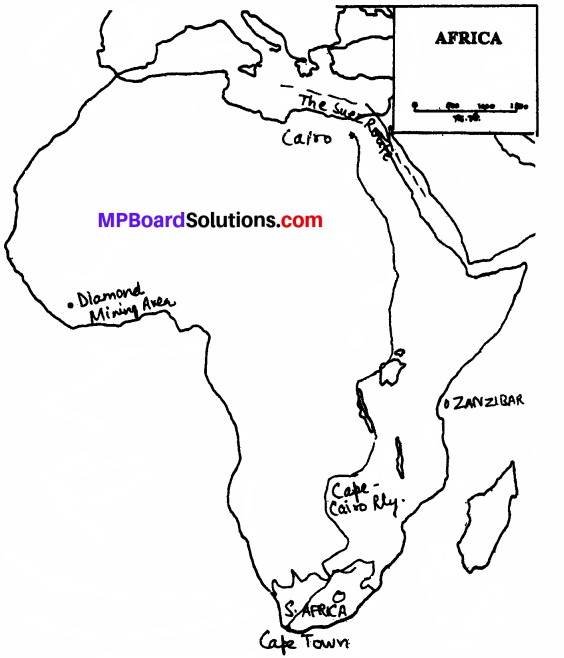