Question 1.
Question (a)
What is Monsoon?
Answer:
The word ‘Monsoon’ originates from an Arabic word ‘Mausim’ meaning season. India is situated in the tropical zone. Most of our rain is brought by the monsoon winds. Our farmers depend very much on the monsoon showers to assure a good harvest. If monsoon comes early the crops suffer because fields are not ready to receive the rain. If it delays it causes drought. Thus, climatically monsoon is a very Important phenomenon.

Question (f)
Explain the general condition in winter in India?
Answer:
The temperature is low in northern India and atmospheric pressure is high. Winds blow from high pressure belt to low pressure belt, i.e from land to sea. Since the winds blow from the land, they are dry and cold. Their direction is north – east to south – west. Temperature falls rapidly. The characteristics of the winter seasons are:

1. Geographical position:
India is located between 8°4’N to 37°6’N latitude. The Tropic of Cancer divides it into almost two equal parts. Indian ocean stretches in the south of India. There are high mountains of the Himalayas in the North. The winds get enough moisture as it is surrounded by water on three sides.

2. The form of the surface of the earth:
The Himalayas stretches like a wall from east to west. It stops the cold winds blowing from the North pole and saves India from severe cold. On the other land it also stops the moist monsoon winds and causes rainfall.

3. Winds:
If the winds did not change direction with the change of season, India would have been a dry desert. In the north, change in the atmospheric pressure in Asia also changes the direction of the winds.

Question (c)
How does Monsoon originate in India?
Answer:
The period from June to September is the south – west monsoon season. The low pressure area developed in the north – west of the sub – continent becomes intense. The south east trade winds blow towards low pressure area in the North India. These moist winds enter into the two oceans on the east as well as on the west (Bay of Bengal and the Arabian Sea). Suddenly they are caught up in the circulation over India and bring rain. The whole country, at one time or the other, gets rain in about 4 to 5 months either through south – west monsoon or north – east monsoon.

Question 4.
Show the following in the map of India:
Tropic of Cancer, Cherapunji and summer winds areas with heavy rain, Arabian sea, Bay of Bengal, Indian Desert?
Answer:
Do yourself. 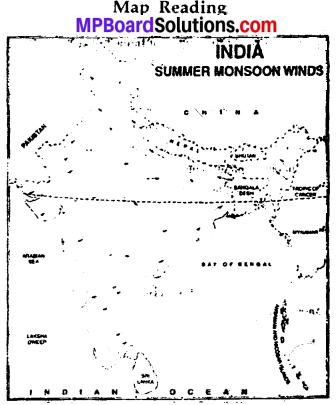 Question 5.
Look at the map above and say?