Question 2.
What is winnowing? Where it is used?
Answer:
The process of separating heavier and lighter components of a mixture by wind or by blowing air is called winnowing? This method is commonly used by farmers to separate lighter husk particles from heavier seeds of grain. The farmer allows the mixture of grain and the husk to fall from a height.

The grains which are heavier fall vertically down on the ground and form a heap near the platform of winnowing. The husk which is higher, is carried away by the wind and forms a separate heap at a short distance from the heap of grains as shown in the figure. 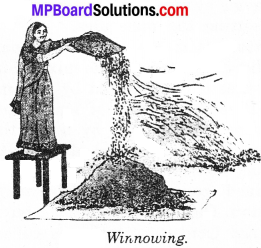 The separated husk is used for many purposes such as fodder for catels.

They remove small dust, dirt, pebbles and other unwanted materials. The quantity of such impurities is usually not very large. In such situations, we find that hand picking is a convenient method of separating substances. 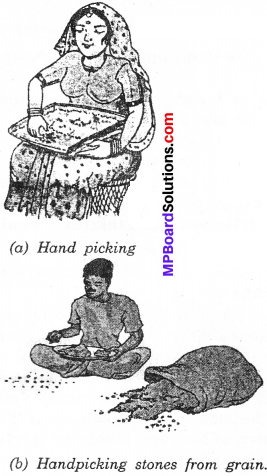 Question 4.
What is sieving? Where is it used?
Answer:
Sieving is a method used to separate the components of a mixture which are of different size. Sieving allows the fine flour particles to pass through the holes of the sieve while the bigger impurities remain on the sieve In a flour mill, impurities like husk and stones are removed from wheat before grinding it.

Usually, a bagful of wheat is poured on a slanting sieve. The sieving removes pieces of stones, stalk and husk that may still remain with wheat after threshing and winnowing. You may have also noticed similar sieves being used at construction sites to separate pebbles and stones from sand. 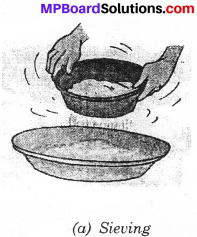 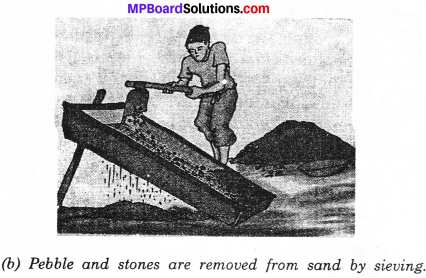 You will observe that sand particles start settling down at the bottom of the beaker forming sediment (Fig. (a). The process of settling down of heavier, insoluble particles from a mixture is called sedimentation. 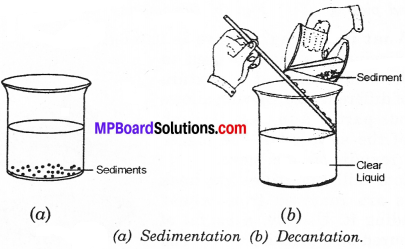 The dissolved particles of alum in water loads on the fine dust particles. The particles become heavy and settles down to the bottom. The clear water is decanted as shown in Fig. The suspended particles remains at bottom as sediment.

Question 8.
Fill up the blanks:

Activity 1.
You have tried a number of methods to separate impurities like mud from water. Sometimes, the water obtained after employing all these processes could still be a little muddy. Let us see if we can remove even this impurity completely. Take this filtered water in a glass?

Tie a thread to a small piece of alum. Suspend the piece of alum in the water and swirl. Did the water become clear? What happened to the mud? This process is called loading. Talk to some elders in your family to find out whether they have seen or used this process?
Answer:
We can separate clear water from a sample of muddy water by loading process. Take a beaker half filled with muddy water and take a piece of alum. The loading of suspended particles is carried out by alum. The alum crystal is slowly moved in water.

The dissolved particles of alum in water loads on the fine dust particles. The particles become heavy and settles down to the bottom. The clear water is decanted as shown in Fig. The suspended particles remains at bottom as sediment.

Activity 2.
Match the each process with its purpose and the way separated components are used:
Table: Why do we separate substances?

Activity 4.
To separate common salt from common salt solution (brine)?
Method:
Take brine in a china dish. Heat it by placing it over a wire gauze on a tripod stand as shown in Fig. After sometime the water starts evaporating. Go on heating till all the water present in the solution evaporates. You will see that some white solid substance is left behind as a residue. This is a sample of pure common salt. 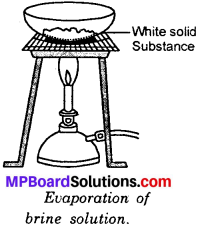 This is due to the density differences between the two liquids Place the separating funnel in a ring stand and place a beaker below it to collect the components. Carefully looking at the layers of separation, drain kerosene and water in different containers. 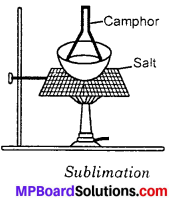 Question (d)
When two elements are brought together, the always form
(a) A mixture
(b) An element
(c) A compound
(d) None of these.
Answer:
(a) A mixture

Question 4.
Match the items in Column A with the Column B:

Question 5.
Some Suji has been stored in a rusty tin. When taken out it contains some flakes of rust. How will you remove them?
Answer:
We can remove flakes of rust by sieving the mixture.

Question 7.
Which substance is used for loading?
Answer:
Alum.

Question 8.
What is the use of alum in loading?
Answer:
Alum is used to make the decantation faster.

Question 11.
What happens during sublimation?
Answer:
Solids are directly converted into their vapours without undergoing liquid state.

Question 12.
How does doctor get distilled water?
Answer:
By distillation of water.

Question 16.
Tea filter is missing, then what method would you use for separation of tea powder?
Answer:
Sedimentation.

Question 17.
Which organ of our body separates harmful components from blood?
Answer:
Kidney.

Question 20.
Solid substance is dissolved in water. Which of the following methods is used to separate it?

Answer:
A solid substance is dissolved in water. It is separated by the method of evaporation.

Question 21.
Which method would you use for the separation of a solid substance dissolved in water? Both the components are to be collected?
Answer:
Distillation is used to separate solid substance and the water from the mixture like salt solution.

Question 22.
Why does visibility increase after rains?
Answer:
This is because the dust particles that were present in air settle down due to loading by fain drops and we can see distant objects if the air dust is free and clean.

Question 24.
Why is chlorine mixed with drinking water?
Answer:
In water – works, chlorine is used for killing the harmful bacteria present in water before supplied to consumers.

Question 26.
Define evaporation?
Answer:
Evaporation method is used to separate solids dissolved in a liquid. This process is largely used to obtain common salt from sea or lake water. The process of converting a liquid into its vapour by heating is called evaporation.

Question 27.
Define crystallization?
Answer:
Crystallization method is used to purify solid substances. The process of separating a pure substance in the form of crystals from its hot saturated solution by cooling is called crystallization.

Question 2.
How would you separate water and mustard oil?
Answer:
The separation of water and mustard oil is based on the principle that water is heavier than oil and also the two are immixible liquids. They form distinct layers. Take the mixture in separating funnels. Separate the water by opening the stop – clock at the base of the funnel in a beaker. 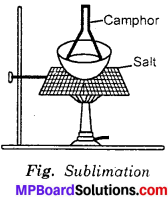 Question 4.
Explain how would you make crystals of sugar?
Answer:
Prepare sugar solution in hot water. The beaker is allowed to cool. Filter the solution. Hang a crystal of sugar in this solution with the help of a thread and a glass rod or a pencil. Leave the solution uncovered and undisturbed for a few days. We observe that the crystal slowly begin to grow.

Question 7.
Define distillation?
Answer:
Distillation is the process of evaporation followed by condensation. This method is used to separate a mixture of two miscible liquids with a difference in their boiling points. This process is also used to obtain pure substance from a solution. In evaporation the liquid is lost but in distillation both solute and solvent are obtained. Distilled water used by the doctor for injections is obtained by distillation. In Kuwait, sea water is distilled to get drinking water.

Question 1.
What is a mixture? Give examples of mixtures?
Answer:
A mixture is a heterogeneous material which has two or more kind of particles. A mixture may have solid, liquid or gas components. Examples: 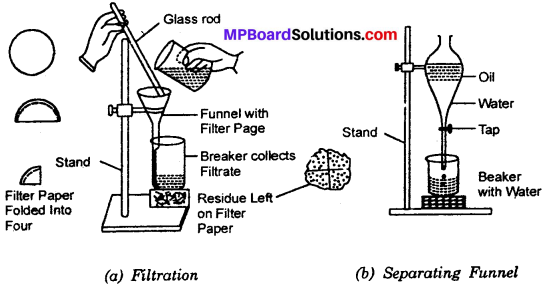 Step – I:
Take the mixture of water, sand and mustard oil, filter the mixture. The sand will be separated. The water and oil will pass through filter – paper and will be collected as filtrate.

The mixture is now filtered through a filter – paper. The clay and sand filtrate. The filtrate is evaporated in China dish. The water evaporates and pure salt is left behind.

Step – I:
Take the mixture in a dish. Bring a strong bar magnet over the mixture. The iron filings are attracted to the magnet and are separated leaving the mixture of ammonium chloride and sand. 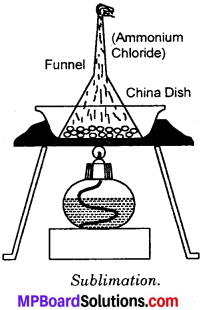 Question 5.
Define threshing with diagram?
Answer:
The process that is used to separate grain from stalks is threshing. In this process, the stalks are beaten to free the grain seeds (Fig.). Sometimes, threshing is done with the help of bullocks. Machines are also used to thresh large quantities of grain. 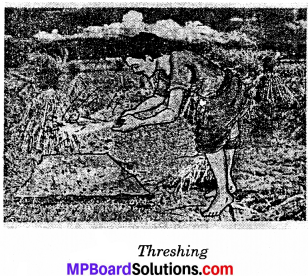 Question 6.
You know various methods of separating mixtures. Here four pictures are shown. Write the correct names of methods under each picture? 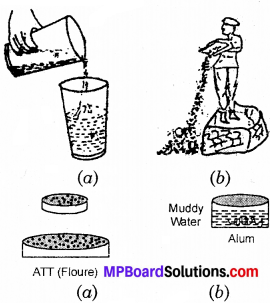 Question 7.
How will you separate pure water from a solution of salt in water?
Answer:
Take the mixture of salt in water in a flask. Set the arrangement for distillation. On heating water vapour rises and passes through the tube. They are condensed in the test – tube surrounded by the cold water. Thus we get pure water leaving behind salt in the flask. 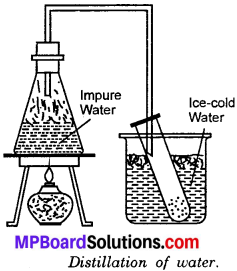